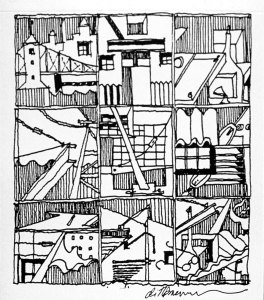 For several years I have produced paintings that document my thought process and client interactions while making architecture. These paintings, termed Frames in Time by Robert Morgan, are visual commentary on spatial or technical challenges encountered during a project. They also portray the social interaction among the individuals engaged in the project.

At times, these paintings have become more like collages including both graphic and written fragments from the design process. They are a visual interpretation of the many actions that influence architectural space making. Influences that when discussed publically are usually limited to jargon about formal design strategies, but in actuality, include social, cultural and the political circumstances of working with clients with complex personalities.

I sometimes wonder what the relationship is between Painting and Architecture. For as long as I can remember I have been motivated to sketch during the architectural design process and to visually chronicle the meetings. These sketches have then become the basis for my paintings.

Yet at the same time I have always insisted that they are unique activities, painting and architecture, and that there is some magical point at which I sense in some innate way that I am leaving the realm of painting and working on architecture.

It has never been as straightforward as “designing through painting” or “painting as design”. Instead, there is some ambiguous relationship that has made them distinct but inseparable activities.

It has never been as straightforward as “designing through painting” or “painting as design”. Instead, there is some ambiguous relationship that has made them distinct but inseparable activities.

When thinking about the two activities of Painting and Architecture I have tried to compare and evaluate my thought process to determine where they converge and depart. Since they occur simultaneously I have thought about how one informs the other. The overlay, or commonality, among the two appears to be in areas that are Conceptual, Procedural and Operational.

As a Conceptual tool painting can make space within the limitations of the two-dimensional canvas. In recognizing these limitations the conceptual boundaries of painting are defined and they reside with line, composition and color. These paintings are composed of many parts each with their own line work within a cell that merges seamlessly to establish an overall composition. An individual cell or frame in time may be a subtext to a larger story made up from the aggregate frames. In Architecture the conceptual zone of spatial possibilities are numerous. The boundaries defined by site; program and tectonics extend beyond two dimensions where poetics of space-making are spatial and tactile.

The conceptual framework of Architecture and Painting converge, however, as both can organize an experience that is viewed as an individual vignette, perhaps a frame in time in a painting or a spatial moment within an architectural setting. They are both an integral part of a larger composition whether a painting about The Dulles Metrorail or the sequence of framed experiences in the promenade to the Metrorail from the street, across bridges to the station mezzanines and on the train.

The Procedural aspects in Painting and Architecture for me are about establishing an organizational framework to express an idea. In painting the cells form a matrix like a cartoon page from which to tell a story. They provide a scaffold for visual order. In architecture, a similar procedure occurs with the establishment of a design  grid that sets an order or is used to delineate the division of space into service and served areas. In both Painting and Architecture the initial procedural act is to establish order that sets the agenda for subsequent moves.

Painting is the visual diary of a process. It is a process that involves space, program and personalities. Architecture is the physical manifestation of a process initiated by an idea and provoked by a need.

The Operational mode of Painting and Architecture converge on an abstract level.   In painting, the application of color in layers, as in the case of my pastels, has the effect of bonding the color to the canvas. This “bonding” or fusing together of the applied “paint” creates color that is unique to the painting. In a similar but abstract way, the interaction of the multiple interest groups that influence civic architecture bring an overlay of unique color to the process. This “bonding” is what makes each project specific and unique.

In summary, the ambiguous nature between Painting and Architecture remains.

Painting is the visual diary of a process. It is a process that involves space, program and personalities. Architecture is the physical manifestation of a process initiated by an idea and provoked by a need.

They remain interdependent but distinct.